COVID-19: PE and PP demand set to surge in China as operations ramp up

Downstream derivatives demand for polyethylene (PE) and polypropylene (PP) in China is set to surge in March as the country’s manufacturers continue to ramp up plant operations, although inventories for these products remain at a high level, according to the latest IHS Markit coronavirus disease 2019 (COVID-19) report.

With Chinese PE converter companies in the regions outside Hubei Province having now largely resumed operations in the latter half of February, there has been “a noticeable improvement in the situation during the past two weeks,” it says in the weekly report dated 6 March. Average operating rates at converters’ factories this month are expected to surge to 60% compared with 20% in February and are likely to be higher than those seen in January, it says. “Improved operations at the converters’ factories will support PE demand. Demand in [the] agriculture sector is expected to take the lead in this recovery of converters’ activities,” it notes.

A similar trend is expected for PP demand, with average operating rates of PP converters in March forecast to surge to 65%, more than double the average operating rates seen in February and higher than those prevailing in January, according to the report. “Demand for masks and isolation clothing continues to remain high in China. This is boosting production of breathable PP membranes and nonwoven fabrics. Machinery manufacturers are reporting a surge in demand for breathable film dies and melt-blown nonwoven dies. This application is expected to support PP demand in China for the next several weeks,” it states.

PE producers in China achieved an average operating rate of 93% in the past week, with PE supplies reaching “almost optimal levels,” it says. As converter factories are still recovering their operations this month, China’s PE inventory stood at 20 days at the end of February and is expected to be maintained at the same level during the first week of March. “We expect the domestic producers in China to continue operating at optimal rates in the coming weeks as converters return to normal consumption levels,” the report states.

PP production in China also improved as producers ramped up output despite an existing high inventory estimated at 19 days. “The warehouses of producers are still full, leaving little room for further storage. Moreover, the PP prices are under severe pressure. Thus, while there is little incentive for the PP producers to operate at higher rates, the resumption of operations at the plants [that] had gone for maintenance in February has boosted industry operating rates,” it says. Logistics challenges faced by producers during February in shipping products to domestic and overseas buyers have also eased significantly, it adds.

Feedstock ethylene supply in China continues to improve on the back of the increasing operating rates of the downstream integrated ethylene producers, but net ethylene sellers remained under pressure and were running at a reduced rate due to the lack of demand in the region, according to the report. “Several major ethylene buyers, among the ethylene dichloride, ethylene oxide, and styrene sectors, will undertake scheduled maintenance in late March or early April. This will soften the spot ethylene demand further. Hence, ethylene demand may weaken further for the upcoming weeks compared with the previous period,” it says.

China’s benzene operating rate also began to increase at the beginning of March, with overall supply expected to return to normal levels this month, the report states. China’s benzene consumption suffered an unexpected drop in February owing to the COVID-19 outbreak, leading to rising benzene inventory among producers. Although downstream demand has started to recover, the operation rate of major derivatives plants in March is expected to remain lower than the level prior to the COVID-19 outbreak, it says.

For the styrene market in China, IHS Markit says although logistics and downstream demand began to recover toward the end of February, the recovery remained slower than expected with the average domestic styrene plant operating rate remaining stable over the past week. The styrene operating rate in March is expected to be lower than the pre–Lunar New Year holiday level due to the sustained weak consumption and negative margins, it says.

The operating rate for domestic methanol production in China has recovered to 51% as of early March from a trough of 47% mid-February, having been at 53% before the lunar holiday, with production expected to increase further by mid-March, according to the report. Two large methanol projects are expected to come onstream during 2020, although the start-up of one of these, the coal-based 2,000-metric tons/year Shenhua Xiwan plant, has slid from mid-2020 to the fourth quarter of the year due to the impact of the COVID-19 outbreak. The other 2,000-metric tons/year coal-based plant is expected onstream by the end of 2020 or early 2021.

The operating rate at MTO plants, the largest methanol application in China accounting for 27% of total consumption in 2019, rose to 68% last week, having fallen to 66% mid-February from a level of 84% before the Lunar New Year holiday. “The outlook for the recovery of the methanol industry in China is uncertain, although an increasing number of people are returning to work since the second half of February,” it says. The second quarter is usually the peak season for demand, with both supply and demand forecast to recover in March, it adds. 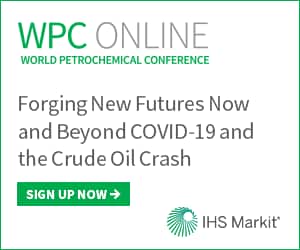