Research and analysis that helps you navigate the global industry
across crop science, animal health and fertilizers.

China has approved the restructuring of the two state-owned chemical companies, Sinochem Group and ChemChina Group. Under the joint restructuring plan, the equity interests of Sinochem and ChemChina will be owned by a newly-incorporated company (the “New Holding Company”), which will be established and wholly owned by the State-owned Assets Supervision and Administration Commission on behalf of the State Council.

An EU court has refused a request from Indofil for the phaseout of the fungicide mancozeb to be suspended in the region until a lawsuit contesting its nonrenewal is resolved. Indofil had asked for interim relief on the basis that mancozeb is a major product for the company. However, in a ruling in March, the General Court of the European Court of Justice said that the company did not establish the seriousness or irreparable nature of the damage alleged in its case.

The American Farm Bureau Federation and more than 30 other ag groups are urging the Biden administration not to ban chlorpyrifos, warning that failure to renew the registration of the organophosphate insecticide “could lead to catastrophic yield losses” for growers across the US. They also contend that the EPA has overestimated the potential harm from exposure to very low levels of chlorpyrifos via food and drinking water, while also underestimating the economic benefits to farmers.

The ISO Technical Committee on Common Names for Pesticides has provisionally approved 14 new active ingredient names. Those include seven herbicides, five fungicides, one insecticide, and one plant growth regulator.

Corteva to pull its dicamba herbicide from North American markets

Corteva Agriscience is to discontinue sales of its herbicide, FeXapan (dicamba), in the US and Canada. The product, along with other dicamba-based herbicides, has been embroiled in legal disputes over alleged damage from spray drift. The controversy dates back over three years when the US EPA issued a conditional registration for a Bayer legacy company Monsanto herbicide, which growers alleged had damaged non-target crops across some 3.6 million acres (1.4 million hectare) in one season.

The definitive guide for buyers in the crop protection market

Market developments shaping Agribusiness and beyond 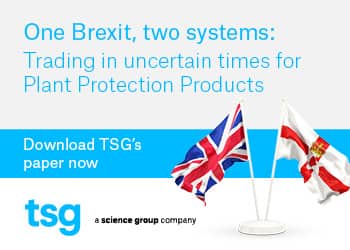 US-based online pet product retailer Chewy witnessed a 51% upturn in sales during its fourth quarter of 2020. For the three months ended January 31, the company again signaled the growing strength of e-commerce in the companion animal market under lockdown conditions, as revenues came to $2.04 billion. This is the first time Chewy’s quarterly sales have exceeded $2bn.

The World Wide Fund for Nature (WWF) believes animal health companies need to set aside competitiveness to start partnering on sustainability issues. Jason Clay – WWF’s senior vice president of market transformation – said the COVID-19 pandemic is a dress rehearsal for the problems that will arise from climate change.

Animal Health Awards: A year of diagnostics, vaccines and a triple combo blockbuster

The winners in the latest Animal Health Awards showed ingenuity and growth in a year of restrictions and uncertainty. The victorious businesses include previous winners such as Zoetis, Merck Animal Health, Alivira Animal Health and Argenta, as well as new names such as Biotangents and Choong Ang Vaccine Laboratories. Rick DeLuca has also been commended for his leadership of Merck's animal health business.

Later this month, the Animal Health Innovation Europe 2021 conference will provide a platform for the industry's leading start-ups. The event's innovation showcase is put together by a selection committee full of industry experts. Sarai Kemp of Israel-based Trendlines Group is one member of the committee. She spoke to IHS Markit's head of animal health Joseph Harvey about the firm's current approach to investment.

Microsoft: There is no single process that cannot be improved by data

Microsoft is becoming much more deeply involved in vertically specialized markets. Microsoft has dedicated an industry engineering team that is building out the Microsoft FarmBeats platform and agriculture-specific cloud offering, which is enabling agriculture and food organizations to build applications and analytics solutions.

The definitive guide for buyers in the animal health market

The imminent threat of disaster at the phosphogypsum stack at Piney Point appears to have subsided with officials overseeing Manatee County, Florida having ceased evacuation orders in the late afternoon of 6 April, returning over 300 nearby residents to their homes. The county commission voted to explore a long term solution for process water at the site via deep well injection, which had been considered in the past ten years but was ultimately never seriously pursued.

Salt Lake Potash announced, via a press release on 22 March, the commencement of process plant commissioning at its Lake Way Project near Wiluna, Western Australia. First time potassium rich harvest salts, precipitated from lake aquifer brine, have been fed into an SOP plant in Australia. First harvest salts have been successfully fed into the feed hopper, conveyed to the surge bin, run through the lump breaker, and then into the attritioning feed tank at the front-end of the process plant.

BCI Minerals has awarded approximately $90 million in contracts to Western Australian companies for its Mardie Salt and Potash Project on WA's Pilbara coast. Initial earthworks for the project have been granted to WBHO Infrastructure, which will construct the large-scale trial pond in April. WBHO will also construct ponds 1 and 2 after a final investment decision (FID) is made.

ICL, a leading global specialty minerals and specialty chemicals company, announced on 24 March it has entered into a definitive agreement to acquire Compass Minerals América do Sul S.A., which includes the South American Plant Nutrition business of Compass Minerals – after a planned carve-out of the existing water treatment and chemicals businesses – for approximately $402 million.

Emmerson Plc announced on 9 February that it has received approval from the Moroccan Ministry of Energy, Mines and the Environment for a mining licence for its Khemisset Potash Project. The licence provides the Company with the exclusive right to develop and mine the potash deposit, within the perimeter of the ML, in the Khemisset basin ahead of the anticipated initiation of construction by the end of 2021.